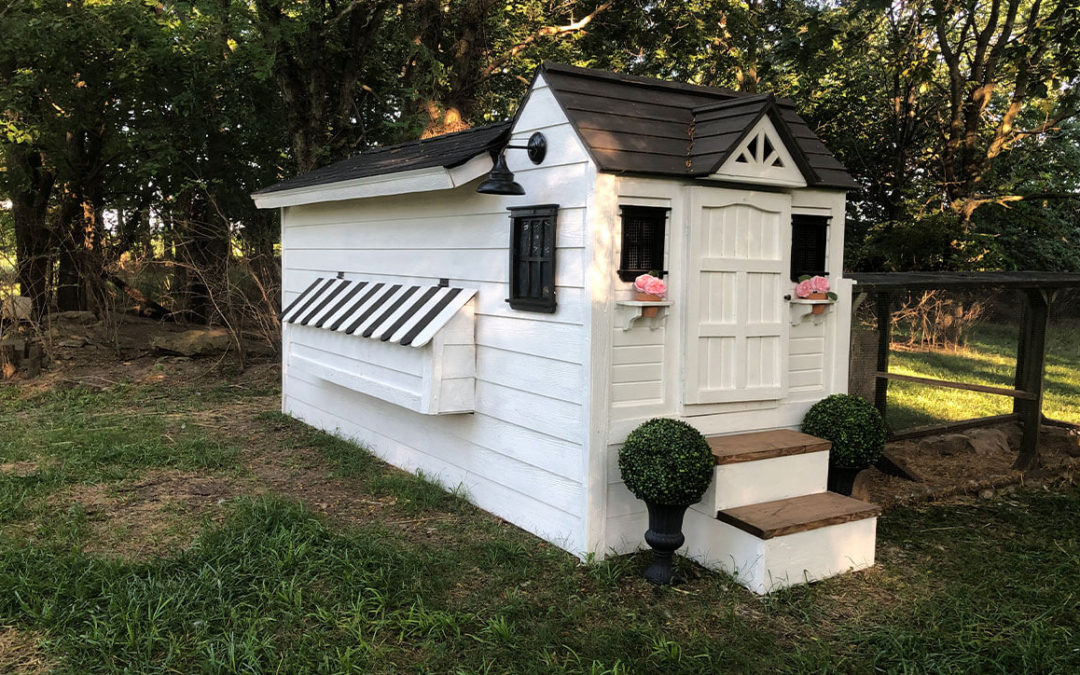 Building a chicken coop is the ultimate “She Shed” for the ladies. The Stenner Farm flock was expanding, and it was time for a new addition to the existing coop. We combined 2 children’s play house structures to build our She Shed Chicken Coop. 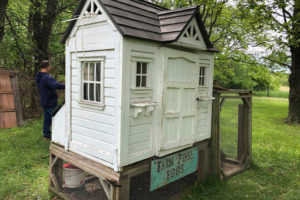 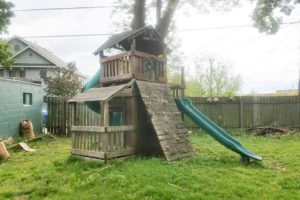 When building a chicken coop we started with our white child’s playhouse over 10 years ago. It was originally purchased from a wholesale club. When we decided to convert it to a coop, we built a nesting box onto the back, raised it up a few feet and added the pen run for some outdoor living space. It was a perfect chicken coop for a small flock. When the chick numbers began to increase this past year, we knew it was time for a coop addition. A beautiful family in town placed an ad on craigslist, giving away a child’s play set. The catch..you have to dismantle and remove it. Of course, my thrifty Fire Chief was all over that offer. 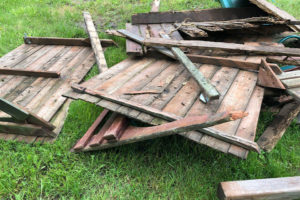 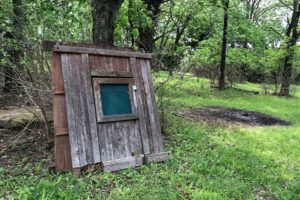 He hooked up the trailer and was so excited to get his new treasure home. When he pulled in the property with his trailer loaded to the top, I gasped. I couldn’t see his vision…what have we gotten ourselves into. Many pieces of the original playhouse were busted up during the dismantling. The only thing I could envision was a huge bonfire at the end of the day. Hello smores! Later, I was happy to find several panels in tact and many structural beams that would work wonderfully. 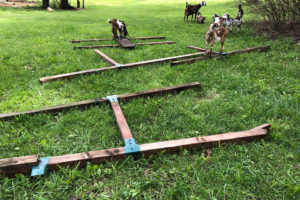 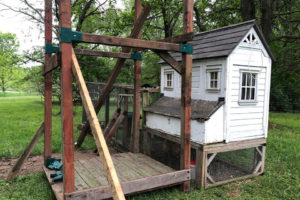 Of course as we started to lay out the structural boards, the goat herd was excited. The entire winter was spent building the goats a new pen, so they thought it was for them. Kid Rock was by our side every step of the way. He has become our DIY mascot, and has quite a following of his own. 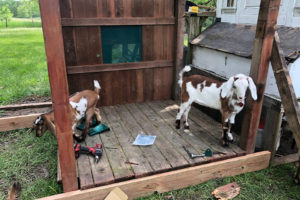 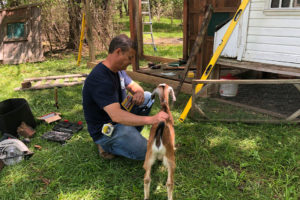 The main framing beams from the 2nd playhouse allowed us to add a 10 foot long addition to our original playhouse. We decided to attach the addition to the back of the old coop, where the old nesting box was. The panels and roofing went up quickly. We had left over roofing material from our main house a few years back. It fit great and saved us some money. 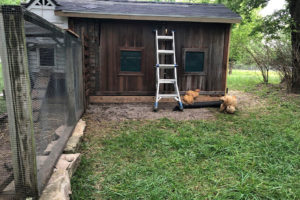 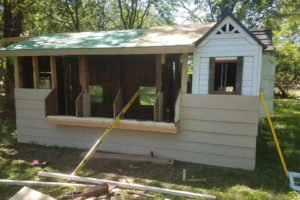 The new nesting box was then framed out for six slots. Chickens will share boxes, so we are good for a flock of 20-25 chickens. At my request, we added a nesting box door that can be accessed from the outside. The light top door will easily lift and allows you to gather eggs quickly, without out going inside the coop. Hooray for clean shoes! 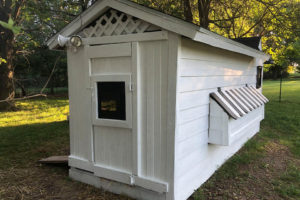 I love the look of black and white awnings, but we are too busy for any high maintenance fabric decor. We are all about keeping things practical. CJ had a great idea and made a DIY, no maintenance awning topper for the nesting box. He cut planks out of the play set cedar, ran them through a planer and rounded off the bottom edge. He then secured and painted them. They turned out fabulous and are weather proof! 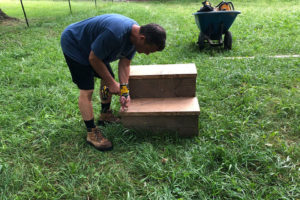 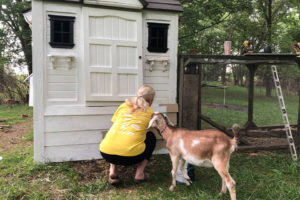 CJ crafted a new stair case with his DeWalt tools. We knew that using several different types of exterior materials could look a bit janky, so we wanted a cohesive color to tie it all together. We added a few pieces of siding and painted the entire coop a fresh white with exterior BEHR paint from Home Depot. We then spray painted the windows and light fixture with Rustoleum. As you can see our goat DIY mascot was a great helper. Kid Rock ended up with white paint across his nose that day. He has to be in the middle of every project we do. 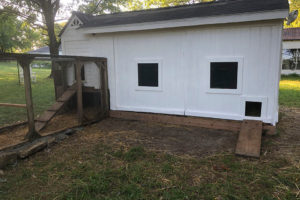 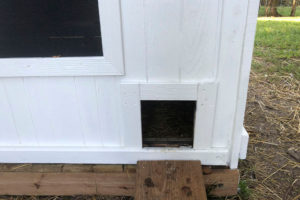 After painting the back panels we decided to add an automatic closing coop door for the chickens. This door is set on a timer to open just before dawn and close after dark. Hopefully they will all settle into this routine of free ranging during the day, and playing it safe inside during the dark and dangerous hours. This week we have a few rebels that want to stay out later than they should, so we are working on our parenting plan for them. As if raising our human teens isn’t enough. Goodness! 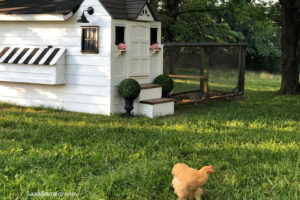 Building a chicken coop was fun. We are thrilled with how the coop addition turned out. We are thankful for our new friends that donated their playhouse to us. It nice to know that two families have enjoyed this structure. I highly recommend repurposing a child’s play set for a chicken coop. If you are creative, thrifty and not caught up in being perfect, this is a project for you to do!

Thanks for stopping by today to check out the Stenner Farm DIY projects. We are honored to have you join in the fun.

Blessings to you my friend!

Join Our Community & Get Blog Updates